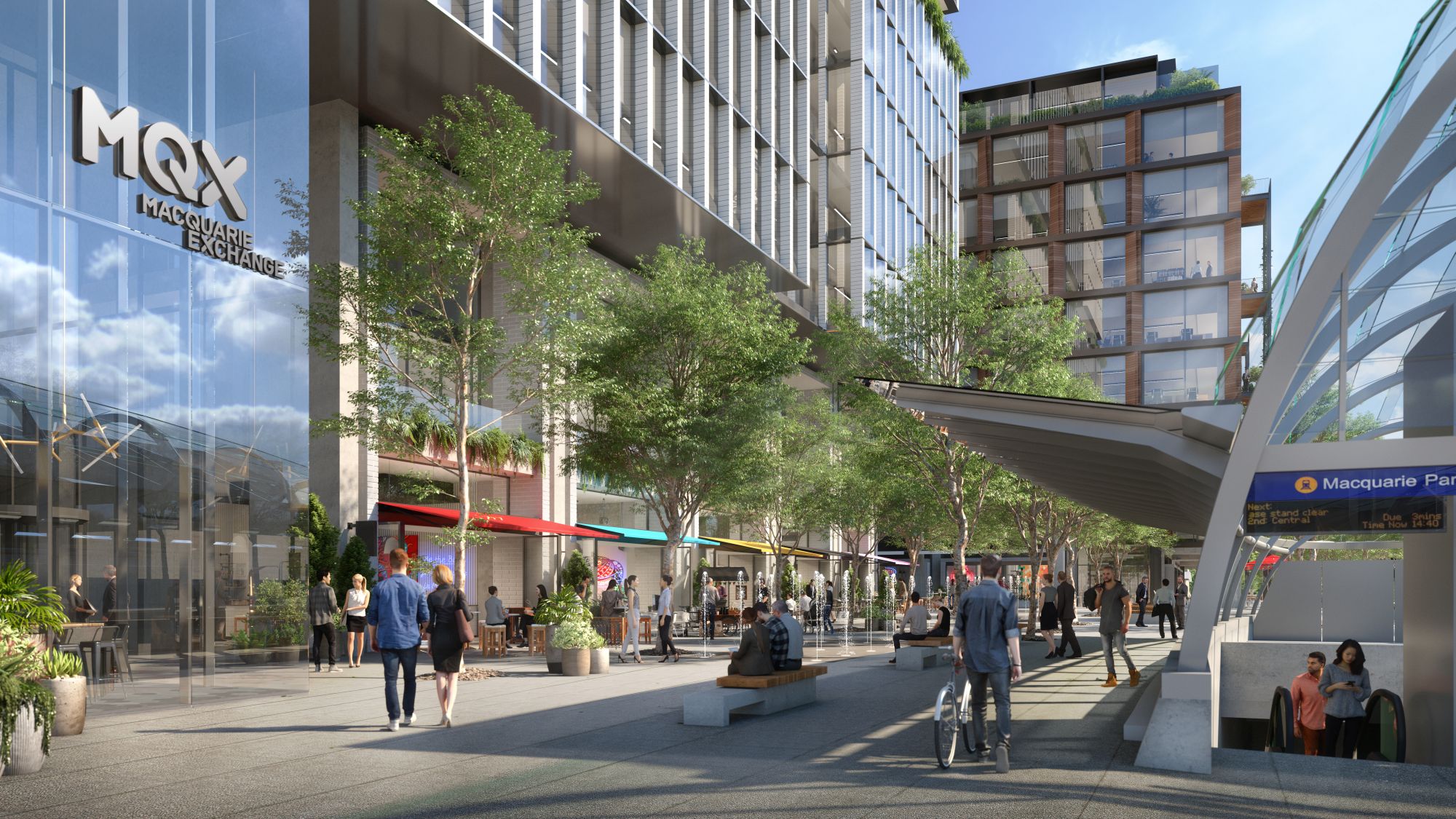 The future of Sydney’s Macquarie Park is set to be dramatically transformed by Frasers Property Australia and Winten Property Group with the official launch of Australia’s first Community Business District – the $750 million1 Macquarie Exchange.

Located at the entrance to Macquarie Park’s new Metro station, Macquarie Exchange will convert a 15,620 sqm site into 83,368 sqm (gross lettable area) across four innovative buildings (MQX 1: 16 storeys, MQX 2, 3 and 4: 8 storeys high). It comprises 74,093 sqm of commercial (net lettable area), 5,693 sqm of retail including a proposed childcare centre and gym and a central park with over 2,200 sqm of green space.

When completed, over 7,000 employees will work in the urban hub designed by renowned architects Bates Smart.

Reini Otter, Executive General Manager Commercial & Industrial for Frasers Property Australia, comments, “Place making is at the core of the Community Business District concept. At the heart of every great place is people. Macquarie Exchange will be a dynamic activated urban commercial community that prioritises social interaction and collaboration - unlike anything that has existed in Macquarie Park before.

“Macquarie Exchange will activate the Metro precinct, setting a new precedent for work environments outside the CBD. With its scale, location and diversity, Macquarie Exchange has the ability to create a bustling mixed-use community, offering a network of spaces with a variety of experiences and activity for local businesses and the community.”

Stuart Vaughan, Development Director at Winten Property Group comments, “Macquarie Park has become one of Sydney’s iconic metropolitan hubs and is undergoing major gentrification and infrastructure upgrades to improve connectivity and amenity in the area as part of local and state planning objectives for the Macquarie Park Corridor.

“It made commercial sense to position Macquarie Exchange at the entrance to the Metro station, which is also the gateway to Macquarie Park’s commercial precincts. The area is already a driver of economic growth and employment in New South Wales and state infrastructure such as the Metro upgrade.”

“The Macquarie Exchange site will provide significant public benefits through the provision of a new publicly accessible park, civic plaza and Metro station, multiple through site links and an activated retail precinct supported by A-Grade office spaces,” he added.

Philip Vivian, Director at Bates Smart said, “Macquarie Exchange is designed to be an authentic urban environment that is rich in human spaces. An urban plaza, pocket park, retail laneway, roof terraces and north facing balconies provide new destinations for workers and locals alike. A green heart acts as a focal point for leisure and work pursuits. This is where city and soul unite in a new kind of urban hub, where pieces of city making come together to create a rich urban experience.”

The A-Grade office building with expansive, interconnecting spaces via the stairs and floors, boasts several key features including flexible floorplate sizes (1,500 to over 2,150 sqm) and leasing arrangements, a vast outdoor urban plaza and central park, retail laneway and onsite health and wellbeing facilities. A full-time Community Manager will be dedicated to creating connections utilising state-of-the-art technology in the smart buildings to build community engagement. Building concierge services will also be provided.

Winter gardens designed with voids to create break-out spaces and maximise natural lighting feature in MQX 1, while MQX 2, 3 and 4 include rooftop office and terrace spaces, outdoor terraces fronting the streets and access to the winter garden overlooking the park. Activated public spaces and inspirational urban art will intertwine in the central park area.

The urban hub will have a WELL Silver and Core rating, a 5 Star Green Star rating from the Green Building Council of Australia and a minimum 5 Star NABERS rating.

Macquarie Exchange is easily accessible to several major transport routes. The new Northwest Metro opens in May 2019 with trains operating every four minutes in peak hour to the CBD. It also accommodates a helicopter pad on site. Only a few buildings in Sydney offer this advantage. The urban hub is easily accessible to major arterials including the M2, M4, M7 and Lane Cove Tunnel. It is also situated on two major arterials – Lane Cove Road and Waterloo Road. Sydney CBD is within a 12-kilometre car journey and Parramatta is a short 13-kilometre commute. Bus stops adjoin the site with access to 30 different routes.

Macquarie Park is a well-established business hub, contributing $9.5 billion to the local economy. 1,900 plus businesses are based in the area, and over 40,000 students attend the university and 57,000 people are expected to work in the area by 20282.

As a leading employment centre for northern Sydney, the area is home to many of Australia’s Top 100 companies already in the area including Foxtel, Optus, Orix, Brother, Canon, Hyundai, Dupont and Konica Minolta.

Macquarie Exchange is a collaboration between two of Australia’s most renowned property developers. Frasers Property Australia and Winten Property Group have joined forces and pooled their combined 140 plus years of experience.

Development approval is expected in August.

Jason Wright and Chris Bailey from GJS Property and Denys Bizinger and Francesco Princi from JLL are the leasing agents. MQX 1 is expected to be completed in Q1 of 2022.

1Estimated completed development value for Macquarie Exchange as at April 2019. 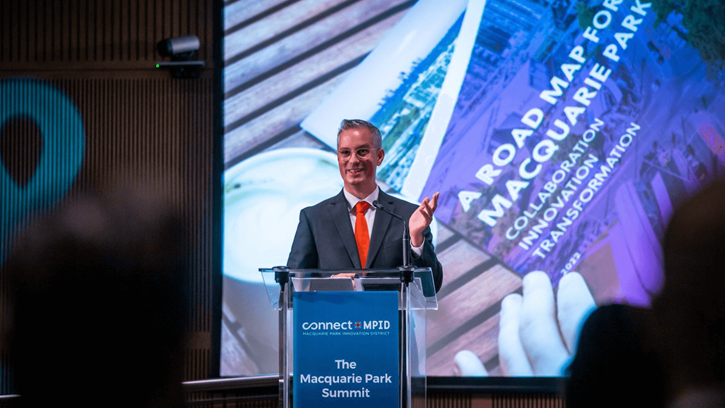 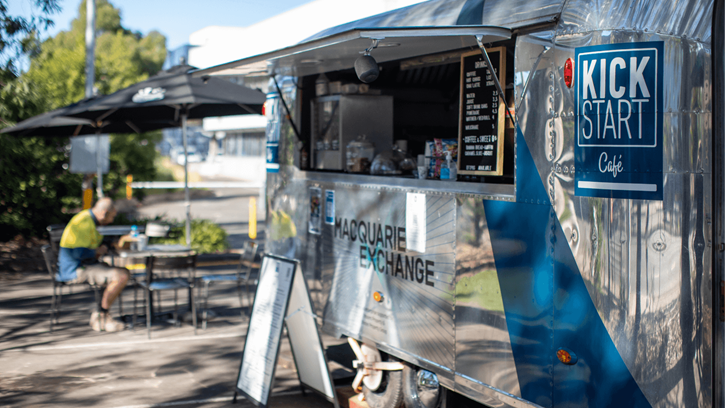 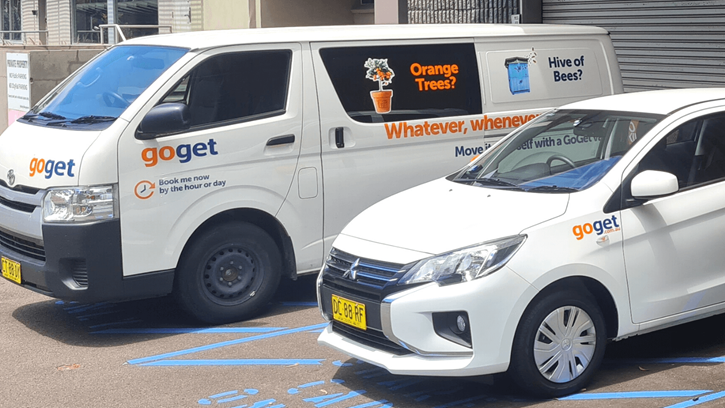 Frasers Property acknowledges the Traditional Custodians of the land on which our business operates. We pay our respects to Aboriginal and Torres Strait Islanders Elders past, present and future.